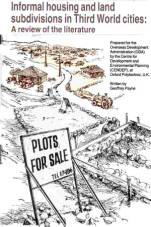 Studies of informal sector housing within developing countries commonly embrace a wide variety of settlement processes. The literature abounds with studies of “self-help” housing, case studies of slums and squatter settlements and their locally defined variations. Whether it is termed an informal, popular or private sector activity, it has been widely assumed that these forms of land development and housing provision are based upon social rather than commercial considerations. In this way, the urban poor are seen as able to protect themselves – at least to some extent – from the rigours of regressive market forces or the inefficiencies of state bureaucracy

For many observers, it has come as something of a shock, not to say a disappointment, to find that many informal sector types of housing provision are as widely subject to commercial pressures as other aspects of urban life. As they have grown in scale, so informal housing sub-markets have become more complex, whether this is a progressive or retrogressive tendency is presently the subject of considerable interest and concern among analysts.

This review of the literature attempts to describe and evaluate the literature on informal housing and land subdivisions. Some of the publications referred to are intended for specialist audiences, whilst others are research reports which may be difficult for the practicing professional to obtain or put to use. By bringing together the efforts of many observers, analysts and practitioners into this short study, it is hoped that research achievements to date can provide a sound basis for both future research directions and, eventually, more responsive government policies.

Buy ‘Informal Housing and Land Subdivisions in Third World Cities: a Review of the Literature’